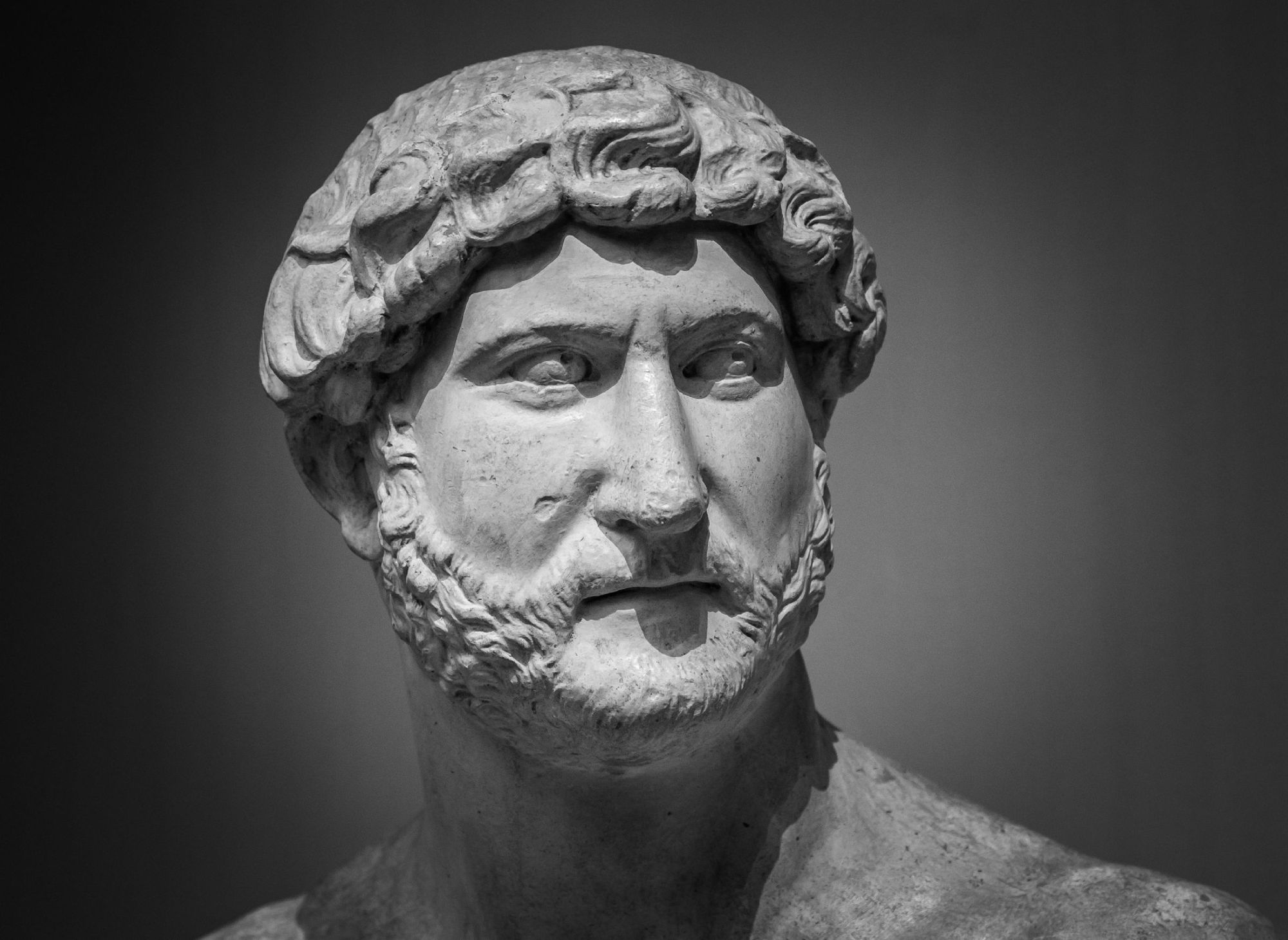 At this point we think we can all agree that the time of the Roman Empire was drastically different than the one we live in today, thank heavens. So even when things were considered to be “going well” then, we probably wouldn’t agree with the statement. But history is what it is, and all we can do is learn from it. We’ve got to remember that what made a good ruler then was someone who wasn’t going to completely drive the empire into the ground. Even if we would have forced them out of power with pitchforks and fire.

That being said, let’s talk about Hadrian.

Hadrian was a passionate, educated man, and a pretty good ruler. Yes, he was handed one of the most peaceful times in Roman history, but instead of sitting on his lazy butt he still went out and achieved greatness. Born of Spanish descent, Hadrian was taught about various cultures from a young age and he latched onto what he was taught. He caught a bug for learning and it never went away. He especially became obsessed with Greek culture. Today, sometimes he’s mistaken for a Greek ruler because he was such a fan. He earned himself the nickname “graeculus” when he was in school, meaning “little greek boy”.

When he was made ruler--there’s some controversy about whether he was named heir by Emperor Trajan, or his wife, Plotina, both of whom were affectionate toward Hadrian--he launched into action. He spent most of his rule away from Rome, touring the country and getting to know his people. This was something that in the past rulers were criticized for. Apparently Hadrian was more loved than the others, though, so the Romans let it slide. Probably because most of what Hadrian was doing was for the betterment of their lives. He’s best known for building projects that he put into action. Being the scholar and artist that he was, he was fascinated by architecture. He liked to be the guy following the superintendent around, asking about deadlines and generally making a fuss about the smallest details. A contractor’s nightmare, if you will. But for the most part, the man had plans. He oversaw the rebuilding of the Pantheon, which was so structurally sound that it still stands stronger than ever today. He ordered extra baths to be built, roads to be improved, and temples throughout the country to be constructed.

You might think that being so widely loved by your people would translate to a disdain from the Roman military, especially since they were being reigned in while Hadrian cleaned up the inside of the country. You’d be wrong. The military respected their emperor since, like so many other leaders, he served his time. He didn’t ignore them, either. He ordered the building of barracks and garrisons to house the military and he spent a significant amount of time among them. In fact, when pictured throughout history, he was usually in military wear instead of heaped in robes and jewels. He did it both ways, that Hadrian. He also ordered the construction of the Hadrian Wall, which protected the empire in the North from invaders. It stood also as a reminder that the Roman Empire was as strong as ever.

On that note, there is one stain on Hadrian’s reputation that’s always present in the minds of historians. No matter how romantic and elevated Hadrian was, he was prone to fits of rage that kept everyone around him on his toes. He didn’t like being disagreed with, and he made it known. There’s even a rumor that he blinded one of his servants when he threw something across the room mid temper tantrum. And this was the man who was the ruler during the Bar-Kochba Revolt in Jerusalem, one of the bloody battles that Rome used to squash the Jews into submission. It all happened because the Jews didn’t want Hadrian to build a new temple to Jupiter on the same grounds as the ruins of their own temple, the Temple of Solomon. As per usual when Rome’s rule was questioned, Hadrian reacted quickly and with the full force of the Roman military. 580,000 Jews were killed during the rebellion, but that wasn’t the kicker. Hadrian had the Jewish professors executed, their bible, the Torah, burnt, and completely outlawed practicing the Jewish religion. Essentially, he tried to wipe out an entire culture when they tried to preserve it. Overreact much?

Hadrian was sick for much of his rule, he had some type of disease that eventually overtook him in the end of his rule. He passed on his reign to an adopted son. However, he had a love of poetry from all of his literary learning in his youth, and he wrote quite a bit. He left us with this quaint little beauty on his deathbed:

So, Hadrian: lover or fighter? The man who loved learning, architecture, and poetry, or the ruler who had a temper to be reckoned with? We leave the ultimate decision up to you. However, you’ve got to admit, he makes for a good story.

The 11th Commemorative Coin in our Roman Empire Series

Known as one of the “Five Good Emperors” of ancient Rome, Hadrian seems to be fifth on that list. He played nice, as long as everyone did what he said. And since people who didn’t obey had a way of dying unexpectedly, they generally found it better to stroke his giant ego. Hadrian is known for his love of architecture and many of his projects still stand and bear his name to this day.