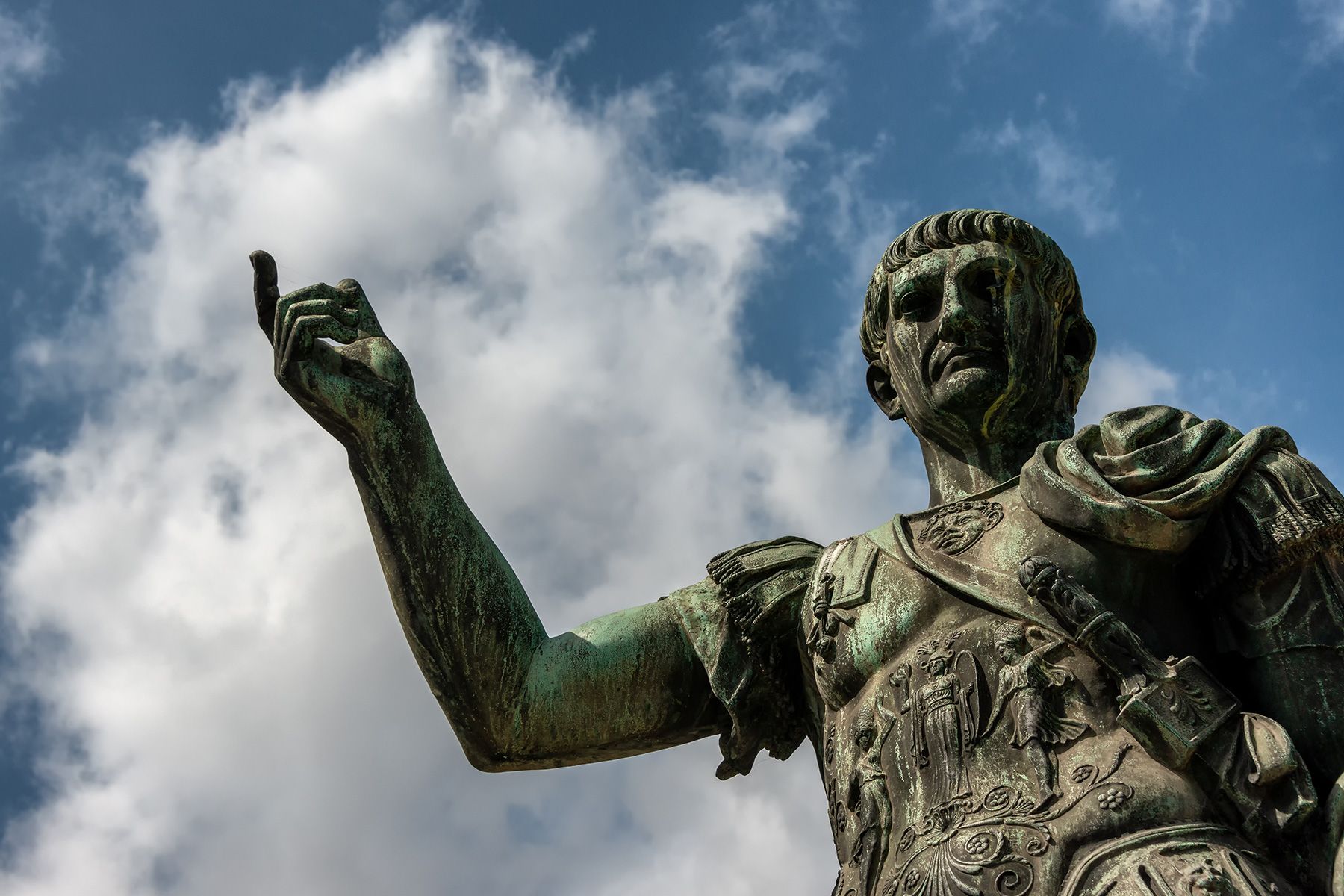 How awesome would it be if your name was a synonym for “good”? Emperor Trajan accomplished that during his 19 year reign. Admittedly he came shortly after one of the worst dictators in Rome’s history, Domitian, so he didn’t really have much to live up to, but man did he demolish expectations. Trajan spent a good amount of his time as emperor cleaning up the mess Domitian had made, but he also made time to expand the Roman Empire to the largest it would ever be, and to seriously benefit his people through his public works projects.

If we could choose any Roman emperor to be our boss (not that we want one…), it would have been Trajan. Rome got lucky with him, not only because he was such a great leader, but because he almost wasn’t. After Disaster Domitian, a guy named Nerva was promoted to emperor. Even though he had some good ideas, the Senate and Roman people were still reeling and this manifested when the emperor’s own bodyguards, the Praetorian Guard, nearly organized a mutiny to kill Nerva. He quickly looked to the military for up-and-comers to make his heir and, spotting the beloved Trajan, placed him between himself and the people. Satisfied Nerva would die soon enough because of his advanced age, the Romans backed off and left Emperor Nerva to die in peace.

Trajan was informed of his adoption and new status with a letter. He took his time leaving his military troops and comrades to travel back to Rome, nearly a year passed before he made it there. When he finally did enter the gates, he mosied through the crowd of poor and rich alike, greeting his people as he went. That act alone scored him major brownie points with the Roman people, and the Senate was no less impressed. He was respectful of their decisions, and preferred to leave the governing to them. He was more of a military man anyway, and he proved it.

The Romans had a few big enemies at the time of Trajan, and he was ready to knock them out. First, he marched north to the kingdom of Dacia. The Dacians had been a menace for a while and though it took three separate tries over the span of several years, Trajan was successfully able to absorb all of Dacia into the Roman Empire and pin them down for good. He also thought ahead and resettled a good portion of Romans into the new area to prevent the likelihood of another strike. What he did next paved the way for the current country of Romania. Then good old Trajan turned to the east when their enemies of old, the Parthians, made a play to take one of the small areas that acted as a buffer between Parthia and Rome.

Parthia was a sore spot for Rome, since they lost ground to the country just after everyone’s favorite, Julius Caesar, was assassinated. Romans didn’t lose often and they definitely weren’t good sports. Trajan knew this, and he did what many before him could not: he beat Parthia. They kept a solid hold on the capital of Mesopotamia for a few years before they were beaten back, but Trajan was a god in his people’s eyes. He had extended the empire further than it had ever been before, from Scotland to the Caspian Sea.

Even though he died shortly after losing Mesopotamia, Trajan’s public work projects set him apart at home in Rome too. In between winning wars and leading his men, the emperor set up programs to help feed poor children, rebuilt damaged roads, constructed aqueducts, and set up more baths across the empire. A leader like that, who could balance attention between personal ambitions, the needs of his people, and the desires of the Senate only came once in a few centuries.

We could all learn a little from Trajan. It’s so easy to lose sight of the people around you when you’re filled with ambition. It’s easy to lose sight of people around you when you’re running a business. But it’s how you treat the people beneath and beside you that defines what kind of person you are, especially as a leader. In the workplace and outside of it, we have to learn the balance between strong and kind. Be a (kind) boss, like Trajan.

Coin #4 in the Roman Empire series

Considered one of the so-called “Five Good Emperors” of ancient Rome, Trajan was known for his efforts to expand the Roman Empire to the East during his reign from 98-117 AD. A very successful soldier/emperor, Trajan also sought to improve the lives of ordinary Romans through social welfare programs. After his death Roman Senators would honor new emperors with the saying “be luckier than Augustus and better than Trajan.”