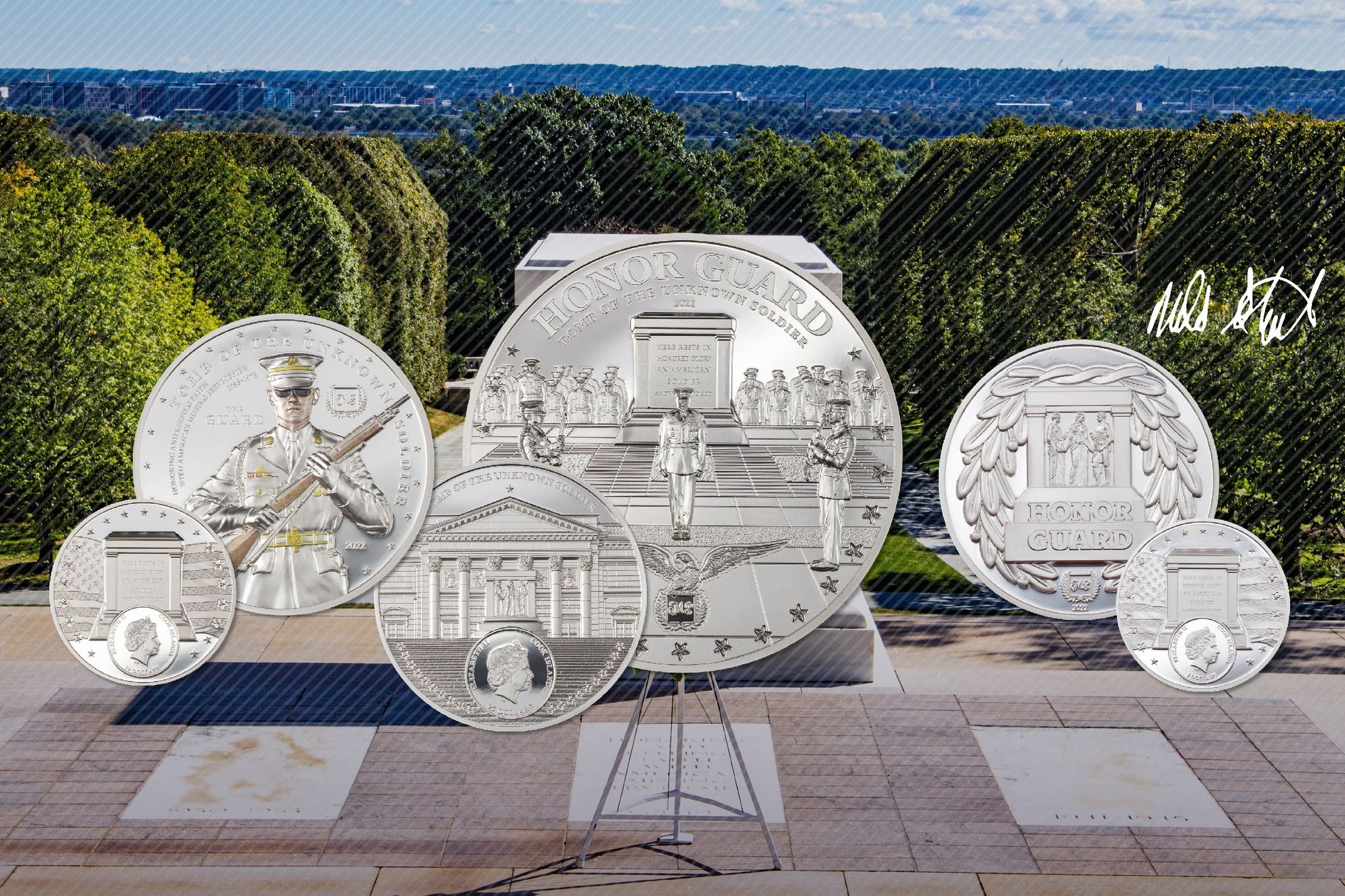 In the year 1916, amidst the wreckage of the world’s first global war, a lone military chaplain stumbled across a small bud of victory for humanity in what seemed, to some, the ending of it. An idea took hold when he found a grave marked, “An Unknown British Soldier”. Assigned to be a spiritual guide of sorts for the army, this chaplain sparked an idea that was adopted among the Allies to honor the fallen, unrecognized soldiers of World War I.

7k Metals is proud to release an exclusive, Miles Standish-designed coin series dedicated to the Tomb of the Unknown Soldier, the monument which represents the lost, the fallen, and the valiant soldiers who defended the United States of America throughout its history.

The first in this series is a one-ounce silver coin showcasing the Tomb itself. Decorated by triple wreaths on the north and south sides to represent six major battles of World War I, the white marble masterpiece is also adorned with an inscription, “Here rests in honored glory an American soldier known but to God.” The east side of the old tomb shows three carved figures: Peace, Victory, and Valor. The mintage of the one-ounce coins will be two thousand one hundred and twenty-one: a recognition of the repetitive 21 count movements made during a guard change to emulate the honorific 21 gun salute.

The 2-ounce silver coin shows a member of the Honor Guard in intricate detail and color. While this is a volunteer military position, less than twenty percent of applicants are selected for training, and even fewer make it through the rigorous process. This honor is something that, once awarded, can be taken away if the owner does something to dishonor himself or the tomb. The Honor guard, or ‘Old Guard’ has faithfully been present twenty-four seven to guard the tomb since 1937, which is the mintage of this coin.

The last of this series will be a beautiful 5-ounce silver coin that shows the Tomb of the Unknown Soldier in its entirety. The tomb itself was created for World War I, however, the monument has been expanded to include tombstones of unknown soldiers from the Korean War, the Vietnam War, and World War II. The Tomb of the Unknown Soldier Guard Identification Badge is one of the highest honors a military officer can receive, and the mintage of this coin represents how many have been given out to date: 688.

At 7k, we like to tell stories, especially about things that bring us joy, hope, inspiration, or even just a smile. The Tomb of the Unknown Soldier has been bringing grieving mothers, children, parents, grandparents, friends, husbands, girlfriends, and everyone in-between things like peace, comfort, closure, and hope. It deserves its own memorial for the legacy it’s provided and continues to provide 24/7, without end in sight.

The Tomb of the Unknown Soldier has served as a memorial since 1932 for the lost, past, and valiant American soldiers. This 1-ounce, Miles Standish-designed, 7k exclusive silver coin showcases the tomb in beautiful detail. Decorated by triple wreaths on the north and south sides to represent six major battles of World War I, the white marble masterpiece is also adorned with an inscription, “Here rests in honored glory an American soldier known but to God."

Watch this page for more information on upcoming releases!