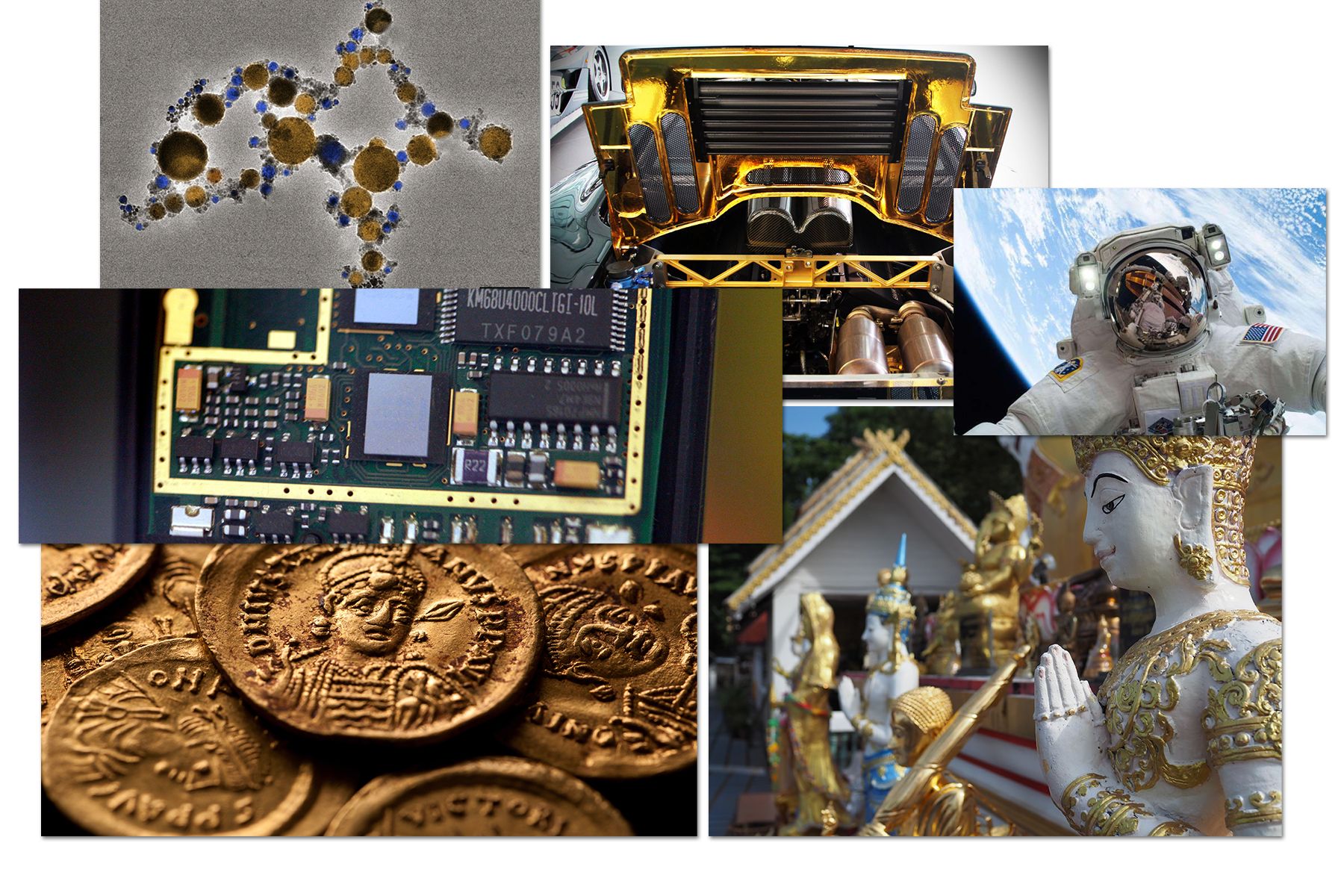 In order to understand gold’s potential, don’t think of it in its stiff, cold, metal form. Instead, imagine it heated to 1,947 degrees Fahrenheit, bubbling liquid gold. Think of it infused into paint, spreading so finely gold flakes would cascade at the slightest touch. Picture a shining golden coin hidden in the wreckage of a sunken ship, centuries old, yet glittering like it was minted yesterday. To understand gold’s full potential, you have to understand what it’s capable of.

Do you know how gold is created? No one really did, until in 2017, the process was caught in photos through telescopes all pointed in the direction of two dying stars, the collision resulting in a supernova explosion which had captured astronomers’ attention. The death of the stars resulted in enough heat and compression to form precious metals like gold, silver, and platinum–together enough to form the Earth 650 times over! This ancient process has been happening since the beginning of the universe, supernova explosions flinging precious metals to the far reaches of outer space. And sometimes, those metals have been swept up in the gravity of stars and have careened toward their surfaces, embedding themselves into planets. Billions of years ago, the same process left a finite supply of gold on Earth, and since then, the yellow metal has starred in many of humanity’s best ideas and moments.

So let’s talk about the ways that gold has impacted our world.

Gold in Art and Culture

There’s something ethereal about gold, something sacred. It’s ancient and otherworldly–literally. For as long as humanity has been interacting with gold, it’s been used to signify things or people of value and importance. Ancient Egyptians buried their Pharaohs in golden burial masks, early Christian artwork of Christ bore entirely gold gilded backgrounds, and Buddhist statues and religious symbols are often decorated with gold leaf. One of the oldest human-populated areas in the world to survive and thrive in the modern day is in India, where gold is such an integral part of religion, family, and life itself, that it is a commonly given gift for any occasion even in the poorest areas of the country. The Chinese people, who also have deep, ancient roots, have long believed in the good luck that the color gold brings. Chinese emperors were often shrouded in golden clothing. To this day, the Chinese New Year creates the biggest boom in the gold business in China every year due to the gold gifts purchased for loved ones to invite good luck in the coming year.

Gold in Jewelry and Coins

Some of the earliest examples of gold usage in the world date back to Ancient Egypt in 5,000 BCE. While a gold necklace or ring still screams elegance and sophistication, the continued utilization of gold in jewelry isn’t just because it’s precious. Gold doesn’t rust. A metal that reacts with the oxygen in the air or the sweat on your palms or water on its surface will oxidize, or rust. You’ll notice when it leaves those annoying discolored marks on your skin or when it begins to degrade and decay. Gold doesn’t do that. Gold lasts. It’s the same reason why coins are minted from pure gold. To last the generations that will use them, coins must be made up of the strongest, most resilient materials in the world, and that is gold. In fact, if you want to create anything that lasts the ages, gold will be a powerful ally.

When we see gold, we see a bright, glimmering yellow metal. However, when we look at gold on a microscopic level, we can see that it’s actually made up of millions of particles with a diameter of less than one-hundredth of a nanometer. When light hits those particles, they filter a color that is anywhere between light pink to deep red. This science is older even than the recently discovered knowledge of what gold nanoparticles are. Ancient peoples like the Romans, Egyptians, and alchemists used it as cavalierly as forging gold flecks into glassware or metal to create a red-gold coloring, or as elegantly as enshrining gold in the crimson stained glass windows of a centuries-old temple.

In the modern day the potential of gold nanoparticles is just beginning to be realized, especially in the medical field. One of the most popular uses of gold nanoparticles in the world of modern medicine may surprise you. In 2008, many studies showed that gold nanoparticles could be used to detect DNA and hormones, like the hcG hormone present in the body of a pregnant woman. That’s right, there are microscopic gold nanoparticles in home pregnancy tests! The red line that appears in a positive test is a product of the microscopic gold flecks being attracted to the hormone. Why does this work? Because gold is stable. It’s among the most stable of the elements, meaning it only reacts with what is in direct contact with it. Even amidst the plentiful oxygen in Earth’s atmosphere, gold doesn’t react, which means it won’t oxidize and rust. These particular characteristics of gold make it invaluable when it comes to the future of medicine. 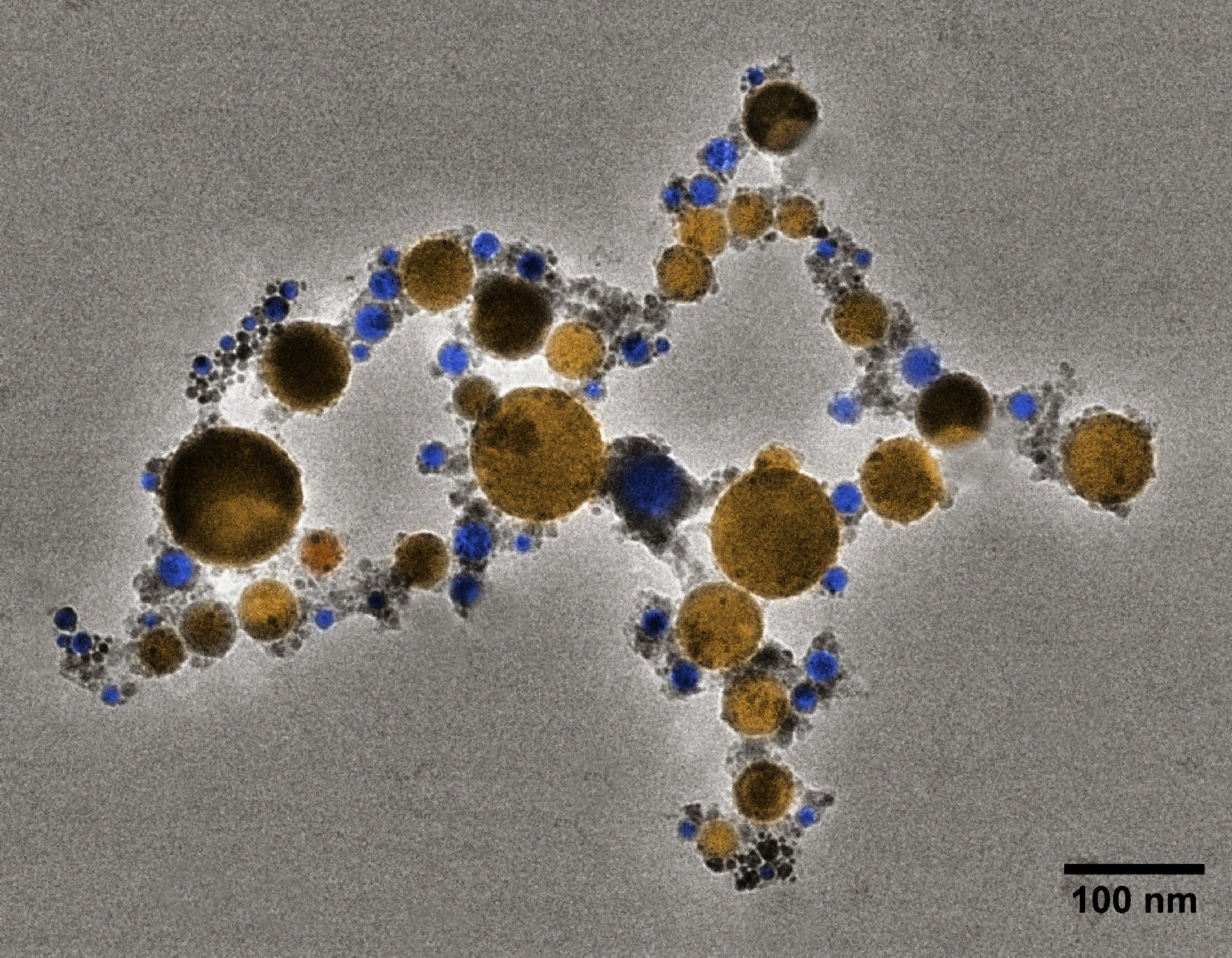 The human body functions on a nanoscale, so the tiny size of a gold nanoparticle is perfect when it comes to attaching therapeutic medicine, drugs, or DNA to its surface and delivering them into the system, especially when it comes to the brain. Scientists have found that, encasing the organ, there is a blood-brain barrier which protects it from any substances in the blood that might harm its delicate environment. As helpful as that is most of the time, that defense mechanism is what makes it very difficult to treat cancer, tumors, and other diseases in the brain. Gold nanoparticles offer a way to safely deliver treatment through that barrier. Its stability plays a key factor in keeping the gold from interfering with the many elements that surround it within the human body.

Gold nanoparticles are interesting in that they react differently to light depending on their size and environment. Medical researchers have found that when certain sizes of gold nanoparticles are exposed to infrared light they begin to move faster, producing heat. Targeted treatment can destroy tumors and cancers without harming the tissue around it. The process is called hyperthermia therapy, and it’s possible because of the unique light-energy properties that gold has in its microscopic form, most of which we are only just uncovering.

Where else might the stability of gold be a positive asset but in the depths of space?

Gold has been used in space travel since the very first American spacewalk when Astronaut Ed White stepped from the comfort of the Gemini spacecraft wearing a gold-plated tether and umbilical cord, sporting a gold-plated visor over his face. The noncorrosive nature of gold made it the obvious choice to reduce the need for maintenance on long space journeys, but gold is perfect for space for so many more reasons. With such little understanding of space and its elements, humans have utilized gold wherever possible, not least of all because it’s so very shiny.

Outside our oxygen-filled atmosphere lies a thick swamp of radiation. If you were to be exposed to that radiation without protection, it would essentially be like putting popcorn in the microwave, except you’re the popcorn.

Now, if you were to wrap yourself in a giant sheet of gold within said metaphorical microwave, it would act like any shiny object: it would reflect. But gold’s unique reflective properties not only allow it to simultaneously absorb and refract light, but the radiation and heat that accompanies it. So when astronauts go out into space, the gold in their visors reflect and absorb light to protect their eyes, the gold in their tethers stay stable and rust-free, and the Mylar gold sheeting on nearby satellites keeps them from overheating. Oh, and the gold in the electronics keeps communications clear and reliable.

That’s the other way gold has changed our world: through technology. Big Tech is the second largest user of gold, right behind jewelry. In 1925, the world’s first circuit board utilizing gold was invented and patented by Ducas Chares, who sparked the discovery that gold is a great conductor of electricity but it’s also an amazing catalyst, meaning it has a way of amplifying reactions using its own energy, without damaging itself. Through harnessing this property, many other tech geniuses have used gold to expand the realm of electronics. Gold is used in nearly every electronic we use on a daily basis, from our phones, computers, TVs, GPS systems, cameras, and radios. It’s used to establish and amplify the connections by which we run our whole world!

Now before you start opening up Iphones to harvest their gold insides, let’s be clear: Gold is highly malleable, so the amount needed to establish any shape is much less than you’d think. Unless you’re talking about gold coins and collectibles, less is more. Its heat resistance makes it durable, but once melted down, gold can be reshaped into the thinnest layers you might imagine and still hold its form. So the amount of gold needed in electronics is miniscule and easily attainable for companies who want to use the best conductor out there. Although across the board the amount of gold used in each product is different, it goes something like this: about 0.03 grams of gold could be found in your cell phone, about 1 gram of gold could be extracted from around 1,000 sim cards, and about 1/10th to 1/5th gram of gold is used to create the ports, circuit boards, and various other aspects of both desktop and laptop computers. Unless you’re really dedicated to harvesting tiny amounts of gold, we suggest you stick to coin collecting.

Speaking of gold being highly malleable, did you know that some car manufacturers are leaning toward using gold to improve the performance of cars? In the steadily growing population of electric cars, gold is being used in the circuitry that powers them. And some manufacturers, such as the performance and racecar company McLaren, believe that’s not where the effectiveness of gold ends in vehicles. The McLaren F1’s engine bay is famous for its gold lining, used as a heat reflector, which does exactly what it sounds like it does. The heat that the impossibly thin sheets of gold plastered against the inside of the hood of the car reflects is funneled out of the engine bay, allowing the engine to keep cool and productive. Because of gold’s malleability, it’s worth the higher cost for performance vehicles like the McLaren, because it can be worked into such complex shapes, like the engine of a race car.

The impacts of gold have touched every aspect of the modern world. Where there’s gold, there’s innovation and invention, creativity and pure awe. You use it everyday without ever really seeing it, but because of gold, our lives are better. We have more knowledge and more experience than ever, and the possibilities are endless. Gold is hope, and things are looking better and better every day.

Until next time friends, stay golden.