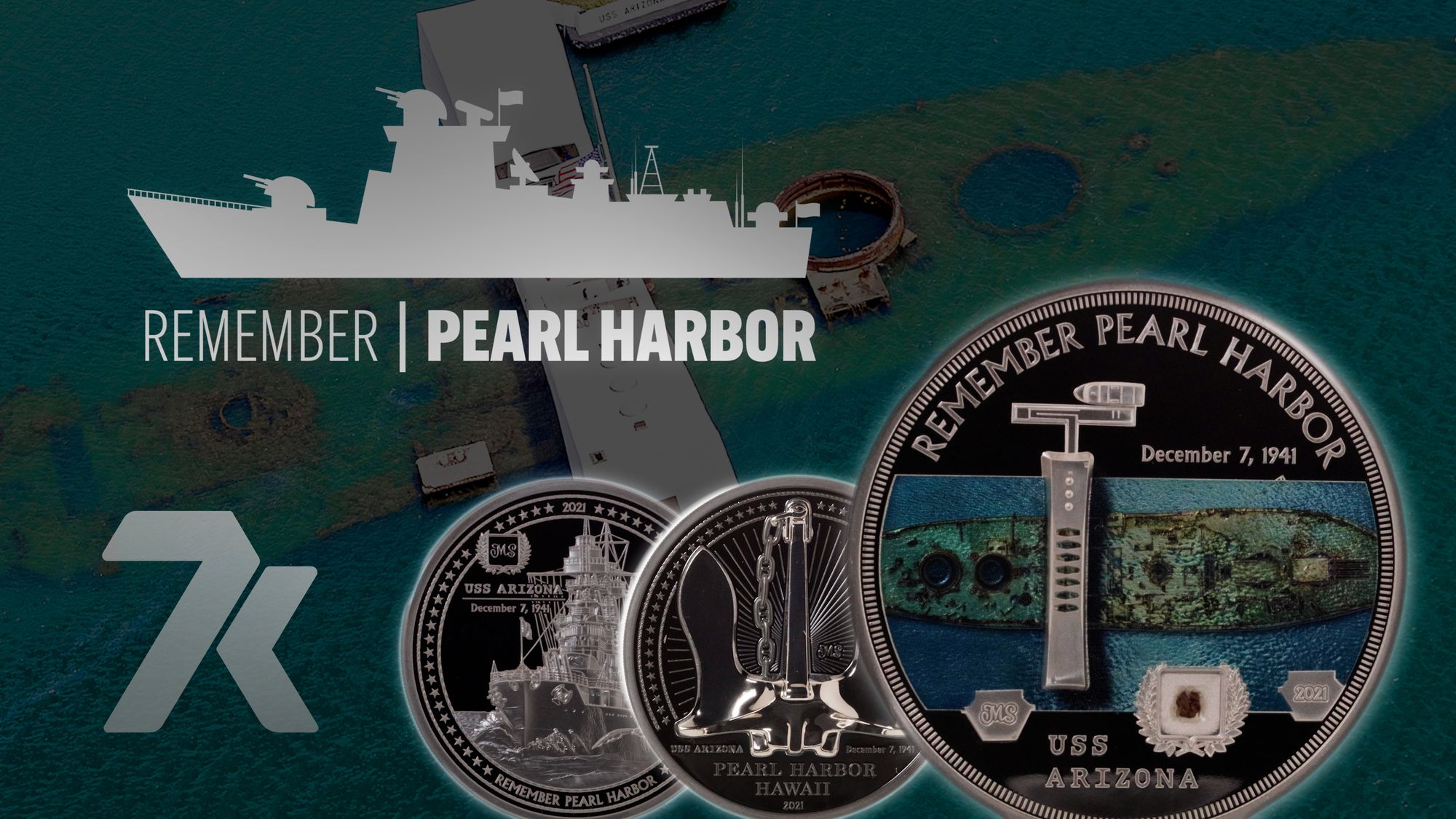 It took 15 months to finish building her and oh was she a sight to see. Her christening brought tens of thousands of viewers to the Brooklyn Navy Yard. And all eyes were on Esther Ross, a 17-year-old girl whose father had campaigned for her to perform the mighty battleship’s christening. Seeing as the Sunset State was the newest addition to the United States, she was chosen as “a typical representative of Arizona's younger generation of women,”--and her dad was a good friend of the Governor’s. Whatever the reason she was selected, Esther was determined to kill it. She practiced for hours at home, swinging syrup bottles at the back fence. When the moment came, she was ready. Because prohibitionists back home had thrown a fit over champagne being used in the christening, Esther held the compromise in her hands. Two bottles: one filled with the ceremonial champagne, and one brimming with water from Arizona’s very own Lake Roosevelt. Pulling the two bottles back and waiting for the mark, Esther christened the USS Arizona loud and proud.

The Arizona entered the waters of New York, freshly christened and ready for it’s first mission. Everyone had known that when the USS Arizona was built, it was going to be the best. Not only was it the largest battleship ever built up until that point, but it had all the newest equipment–a dozen 14-inch guns on her deck with a range of up to 20 miles, 8 anti-aircraft guns, and an additional 8 machine guns mounted and ready to defend the great country that built her. In 1915 if you’d have asked what the fate of the giant that had just been released onto the waters of the East River was, most everyone would have told you it would have a long military career. As it happened, the USS Arizona would never know one battle.

It was a serene morning aboard the USS Arizona, sun rising on the beautiful Hawaiian islands. Church services were scheduled to start shortly. The U.S Navy Band Unit 22 sat on the deck, tuning their instruments in preparation. Crew members bustled around above deck and below, manning their positions with ease. Many of them were young men between the ages of 17-19. They’d been preparing for war for months now, the pressure building slowly as U.S. involvement looked more and more likely. For now, everything was calm on a Sunday morning in paradise.

Ken Potts, a crane operator aboard the USS Arizona, was onshore when the attack began. He heard the sirens and a voice over the radio that said, “All Navy personnel, return to your ships.” Crammed into the back of a cab with 6 other sailors, Ken and his shipmates scrambled to get back to battleship row. When asked what the first sign was that something was wrong, Ken replied simply, “Noise.” The sailors made it back to Pearl Harbor to see the entire area burning before their eyes. The thick layer of oil coating the ocean surface spoke to the damage of the ships it poured from. Ken and his fellow sailors hopped into a boat and took off toward the USS Arizona. On their way, they searched for men in the mixture of oil, water, and fire, and scooped them into their boat, desperate to save as many as they could. As Ken reached the fantail of the ship he heard a massive explosion.

John Anderson had just stepped inside the mess hall to have his morning meal when he heard the heavy boom. Running to a porthole, he saw the planes descending with red balls on their wings. “The Japanese are here,” he told his fellow sailors. John sprinted to pull the general alarm and had almost reached it when a bomb dropped so closely to him, it threw him aside. Fire sprung up around him and then the Japanese were on them. Machine gun fire rained down on the deck of the ship. John immediately sprang into action, manning his station as a gunner on the number four turret. Realization dawned on him that there were no Japanese ships in sight, only the planes, and his twin brother Delbert was stationed above deck as an anti-aircraft gunner. The decision was made. He was on his way to the top of the deck, climbing a ladder when the USS Arizona was hit with a bomb that ignited their artillery reserves. “I got to the top of the ladder and an enormous explosion occurred and people were just blown all over the place,” John said in an interview. “There’s all kinds of body parts.” With difficulty, John made it back to the turrets amidst raging fires and exploding ammunition. On his way, he found a man who was alight with flames. John was able to smother the fire and get him off of the ship. “He was from Greenfield, Ohio, I never forgot that. And I saved him.” John helped to save many men from the burning, sinking Arizona by dumping them into smaller boats that came to collect survivors. He defied his commanding officer's orders to get off the boat until the man dragged him off with force. John wanted to stay and find his brother, but never did. On another mission and ship years later, he would be told by a surviving gunner that he saw Delbert shot down by Japanese gunfire right as an explosion knocked the gunner overboard, and he knew no more than that. Delbert’s body was never recovered.

“After church I had a date to meet a little gal over on the beach. Her name was Nikki,” Lauren Bruner, anti-aircraft gunner on the USS Arizona told Arizona Public Media in his interview. “Never got to see her.” Lauren served with his best friend, another gunner named William “Billy” Mann. Lauren was nearly to his battlestation amidst the attack on the Arizona when he was shot twice in the leg by a Japanese pilot. The pilot circled around to begin his next attack and Lauren remembered it clearly, saying, “Big old grin on his face, mouth wide open. I could see all those teeth.” He watched the fatal 1,700 pound bomb when it dropped 20 feet from where he was stationed, into the number two turret beneath, igniting the powder magazine, instantly killing his best friend Billy stationed there. Lauren was stranded on the broken husk of the USS Arizona with 5 of his crewmates while fires licked and snapped at their bodies from all around. A crew of a small repair ship docked on the side of the battleship spotted the 6 men and threw the end of a rope to them, creating a line from the doomed ship to the small savior. Lauren was second to last to cross that 100 foot line. He did it with two bullet wounds in his leg and burns across seventy percent of his body.

All in all, the American death toll at the bombing of Pearl Harbor was 2,403. 1,177 of those deaths were USS Arizona ship members. Exactly 80 years later, we remember those men that paid the ultimate sacrifice in a surprise bombing that changed the course of history. Would the United States have entered into World War II had that infamous attack not happened? While we may never know the answer, we do know that that strike on American territory that took American lives could not have gone unanswered, as did the Japanese. Admiral Isoroku Yamamoto, a key player in the planning of the Pearl Harbor attack, went down in history for his quote: “I fear all we have done is to awaken a sleeping giant and fill him with a terrible resolve.”

The USS Arizona Memorial in Hawaii welcomes about 1.4 million visitors annually. As of 2021, there are still two remaining survivors from the USS Arizona: Ken Potts of Provo, Utah and Louis Conter of Grass Valley, California, both of whom celebrated their 100th birthdays this year.

We at 7k Metals, along with our good friend and incredibly talented designer, Miles Standish, want to join the effort to keep these events in the forefront of our minds as the 7th of December rolls around. The events that transpired and the people who lost their lives to them deserve to be remembered beyond a few generations. Just as those 1,177 soldiers are entombed in a once mighty battleship, they should be just as encapsulated in history. So as the date comes and goes remember to remember the USS Arizona and all the heroes she’s carried. From birth to death and beyond.

To commemorate the 80th anniversary of the attack on Pearl Harbor and in honor of the sailors who gave their lives there, we introduce:

The USS Arizona was christened on June 19th, 1915. The ceremony was performed by 17-year-old Esther Ross, chosen from the newest state in the Union. Arizona. Due to prohibition, she swung two bottles to break over the proud ship's bow. A traditional bottle of champagne and a bottle of water from her home state's Lake Roosevelt. After that, the newest member of the United States' Navy fleet sailed off to what everyone assumed would be a glorious future. As it happened, the USS Arizona never saw even one battle before her tragic end at Pearl Harbor.

This special historical memento was made available to 7k members on Saturday, December 4th, 2021 @ 5pm (Mountain Time) in a coin drop that was announced at our live event in SLC. There are still some left! Head over to the Products tab on 7kmetals.com to grab one while they last.