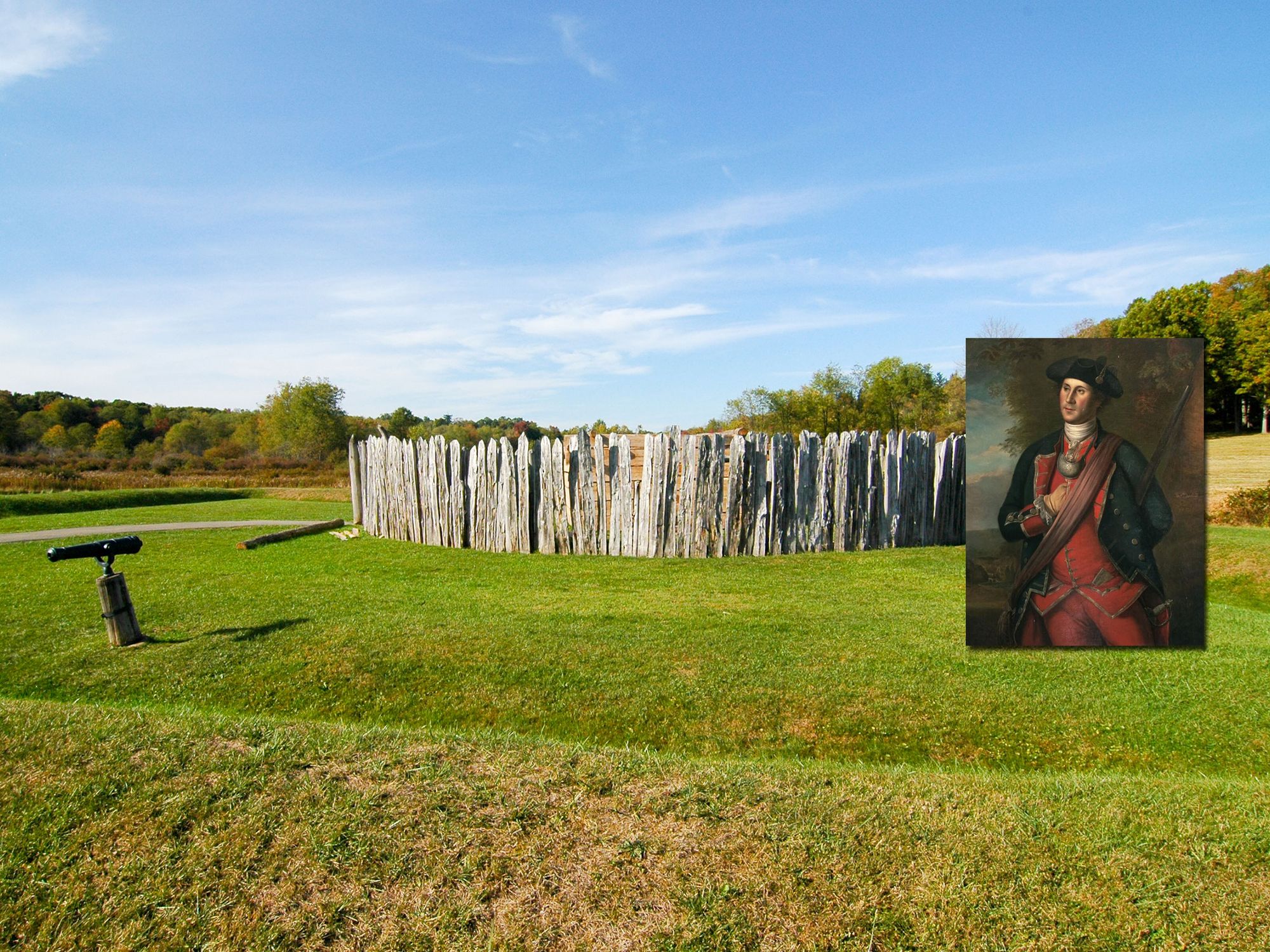 We all know that when we try something new, a new job, hobby, or sport, we’re most likely going to fail a time or two before we get it right. Practice makes perfect, right?. Thankfully, for most of us a failure only means a slight setback and some time needed to figure out how to move forward. So we can’t really relate to the first time Colonel George Washington experienced a failure at a place called Fort Necessity because it meant that a lot of good men were hurt and even died. That’s not a weight anyone wants to carry around with them.

Now you might think, “Well, why are you bringing it up? George went on to be one of America’s greatest Commanders, even became the colonies’ Commander-in-Chief!” and you’d be right! But how do you think he got there? Washington’s failure at Fort Necessity sparked in him an awakening and it made an overly confident and ambitious boy of 21 into the kind of man who successfully led a new nation to independence.

So, the year was 1753 and France and Britain were acting up. See, both countries were quickly trying to scout and claim as much land in the Americas as possible, and it just so happened that they both decided they wanted a piece of the Ohio Forks, a junction that connected Lake Erie to the Allegheny River. It was the perfect place to control the waterways and what supplies came and went, so neither of them was willing to give up the territory. The French got there first, and built their headquarters, Fort Duquesne. But Britain believed they already owned the land because…you know…it was theirs. Give it baaaaaack (foot stomp).

Britain instructed the Virginian Governor, Robert Dinwiddie to send someone to tell the French to get out, and Dinwiddie knew exactly who to send. Little Georgie, only 21 now, who’d been surveying Virginia territory for years, was the obvious pick to make the grueling journey up to Ohio. George was thrilled, he leaped at the chance to show everyone what he was made of. So he and some companions traveled through the winter months, over mountains and through rivers to deliver the Governor’s message.

When they finally arrived, frost bitten and exhausted, they were shown to a smaller fort called Fort LaBoeuf. To the French Captain’s credit, he did receive them quite well and served them a nice cup of tea before laughing them out of the door, promising to tell his superiors at Duquesne. Captain Saint-Pierre probably figured it would be long enough before the Virginian Governor could get anyone back to forcibly remove the French that they would have plenty of time to prepare.

Well it wasn’t four full months later that Washington was back to Virginia, out, and on the road again, this time with 150 men at his disposal and a brand new title: Lieutenant-Colonel. He was on his way to the Ohio area to meet other British forces gathering to deal with the French, when he found out that the French had overrun the first of his fellow soldiers that had arrived. Instead of subjecting his men to the same fate, he held back and tried to secure the road to Fort Duquesne for reinforcements, and made sure British Native American allies were still able and willing to help.

This is where things got rough. 21-year-old Washington was trying his best to be a good leader to his men, but he was young and inexperienced. This was his first real claim to leadership, and as a colonel he felt like he was doing a pretty good job. He was holding the fort while the British forces were on their way. So when he heard about a small group of French encroaching on his hard-earned territory, he sprung into action. He and some 50 men traveled through the night to surround the French and launch an attack. A sneak attack, if you will. Washington himself shot the first round, arguably the first shot in the French and Indian War, which rolled into the 7 Years’ War. His men quickly joined in and after only 15 minutes, the French soldiers surrendered. Both sides fervently argued that the attack was the other’s fault, but George’s argument was “by hiding in the woods near the Virginian position for many days rather than openly acknowledging their presence, the French were acting in a military capacity, not a diplomatic one. As such, he and his soldiers were in danger of the French, and had a right to defend themselves and their camp.” (mountvernon.org)

Well, turns out George had bitten the tail of the snake and he was not ready when its ugly head reared back. He only had time to build a makeshift battle fort, which he named Fort Necessity–thank you, Colonel Obvious–before the French came raining down on them. George had turned the fight personal when his skirmish the night before had resulted in the death of the French group’s commander, Joseph Jumonville, who just so happened to have an older brother, Captain Louis Jumonville, and it was he who led the attack against Fort Necessity. A quickly built wooden barricade and a few cannons were no match for Jumonville’s rage. He turned out to be a halfway decent guy, though. When the English surrendered he agreed to allow what remained of Washington’s people and the Colonel himself to leave peacefully.

George had just gotten the beating of his life so far and it took its toll. His pride in his leadership and hasty move had cost dozens of his men’s lives. We can only assume this sparked a change in the young man, because the next battle he was a part of, a little spat called The Battle of Monongahela (it’s a really famous one, if you didn’t know), George didn’t go into the battle as a colonel. He entered as an “aide de camp”–basically a secretary–to General Braddock, a renowned British general. This was because the Battle of Fort Necessity cemented the fact in the British Parliament that not only were they at war, but that the colonists needed ‘real’ leadership. So they decided that they would still give colonists the titles of commanding officers, they just wouldn’t really have any power over ‘actual’ British soldiers. Step aside, children, the adults are going to war.

That didn’t sit well with George. He was quoted in a letter to a friend saying, “...I think, the disparity between the present offer of a Company, and my former Rank, too great to expect any real satisfaction or enjoyment in a Corps where I once did, or thought I had a right to, command...." (mountvernon.org) Instead of serving at a lower rank, he decided to renounce any title at all and serve as best he could as a volunteer. Young Washington was still passionate and proud as any young man in his position, but to his credit he was right there on the front lines with any paid soldier.

In fact that’s where he was in the Battle of Monongahela when General Edward Braddock was shot and mortally wounded. Witnessing his commanding officer fall, Washington saw the chaos begin and sprang into action. He began to give orders and rally the men with him, taking charge and leading by example. Through the course of the battle, two horses were shot out beneath him and he had multiple bullet holes through his coat, but not a single shot hit him. He would later go on to praise “a Providence” (mountvernon.org) that saved him and his men from death, even in the face of a lost battle. He became very spiritual after this experience, and maybe that’s where humility and meekness began to develop him from the boy he was to the man he would become. He became a man of faith and firm belief, and that passion is a major reason for how the United States of America came to be.

As General Braddock lay dying, he beckoned George to his side. With all the authority he could muster, he laid the general’s sash in Washington’s hands and bestowed the name of General on his successor. Braddock had seen how even amidst a losing battle, George had taken the reins and given orders that would save his mens’ lives. He couldn’t have picked a better man. This was the real beginning to General George Washington’s military career. Braddock saw the young lieutenant colonel who’d failed to succeed the first time he’d tried to lead men into battle, and he saw how George the volunteer had launched into action and not only redeemed his past mistakes but had shown incredible growth as well. This was the man that could lead us to victory.

George didn’t fail spectacularly at Fort Necessity. He did what he could with what he had and probably not many could have done better, but he was drastically underprepared and overconfident. The truth is so many of us have failed for the same or similar reasons. But yet again, good old George gave us an example to follow as he showed us the way to get past those failures. Humility goes a long way to helping us accept failure gracefully and to really study why we didn’t succeed so that next time, we’ll know how to do better. Determined, disciplined action gets us the rest of the way. So next time failure comes your way, remember George, the hero of Monongahela!