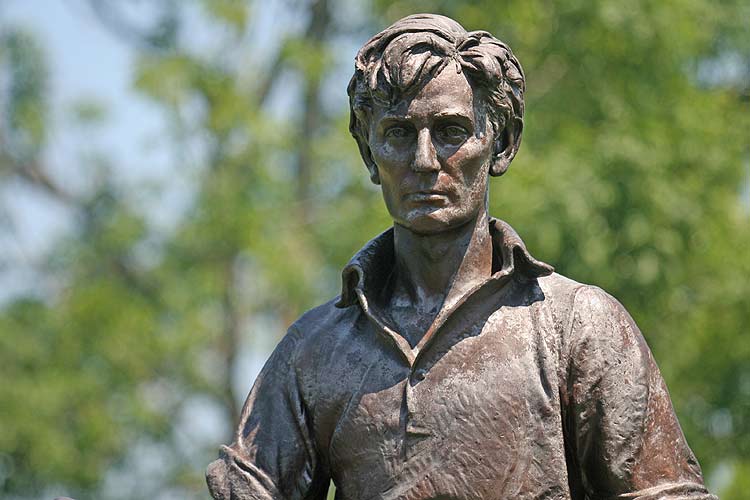 Abraham Lincoln once wrote, "It is great folly to attempt to make anything out of me or my early life. It can all be condensed into a single sentence…'The short and simple annals of the poor.' That's my life and that's all you or anyone else can make out of it."

Enough said, right? But as little as Abe thought of his past, we, being his adoring fans, are interested in it. So we dove a little deeper.

Abe had an abysmal excuse for schooling--throughout his life he only completed about a year’s worth of formal education--but his hunger for knowledge didn’t let that stop him from learning. He was taught the alphabet and learned to read at a young age, and after that chores and work didn’t hold the same appeal to young Abe anymore. Some of his family saw it as laziness, especially his workhorse father, whose hands had provided everything he and his family needed in life. While Abe was developing his mind, all his dad saw was an idle body.

Setting off on his own wasn’t difficult for Abraham; he was destined for bigger, better things from the beginning. Through the power of reading, he taught himself trades, language, literature, and history, all of which shaped him for the crucial role he would eventually play in bringing freedom to every citizen of the United States.

The Gettysburg Address has got to be the most impressive example of Lincoln’s self-taught skills. The Battle of Gettysburg was a bloody, gruesome battle in which an estimated 51,000 American lives were lost, and turned the tides in favor of the Union. The tragedy of the Civil War, though, was that either way the war went, America lost. Lincoln saw this clearly. He stood on the hallowed ground of the Gettysburg Cemetery and dedicated it with a two minute speech.

We think it’s important for everyone to read these words at least once in their lifetime.

"Fourscore and seven years ago our fathers brought forth, on this continent, a new nation, conceived in liberty, and dedicated to the proposition that all men are created equal. Now we are engaged in a great civil war, testing whether that nation, or any nation so conceived, and so dedicated, can long endure. We are met on a great battle-field of that war. We have come to dedicate a portion of that field, as a final resting-place for those who here gave their lives, that that nation might live.

It is altogether fitting and proper that we should do this.

But, in a larger sense, we cannot dedicate, we cannot consecrate—we cannot hallow—this ground. The brave men, living and dead, who struggled here, have consecrated it far above our poor power to add or detract.

The world will little note, nor long remember what we say here, but it can never forget what they did here.

It is for us the living, rather, to be dedicated here to the unfinished work which they who fought here have thus far so nobly advanced. It is rather for us to be here dedicated to the great task remaining before us—that from these honored dead we take increased devotion to that cause for which they here gave the last full measure of devotion—that we here highly resolve that these dead shall not have died in vain—that this nation, under God, shall have a new birth of freedom, and that government of the people, by the people, for the people, shall not perish from the earth."

Abraham understood that a separated nation was the last thing that the United States could afford, because it meant a true democracy couldn’t work, not for long. Since the Revolutionary War, the world’s eyes had been turned toward the colonies, holding their breath and waiting to see what would happen to the young, impertinent nation that had shrugged Britain’s hands off their shoulders and insisted that they do it themselves. But even more important, he knew that following the path of the men who had written the Constitution was absolutely crucial for success in the American Project.

Lincoln had studied George Washington throughout his life and he knew the former President’s stance on slavery. He knew the Founders of America had written the phrase “all men are created equal” not unintentionally, but with the very intention of bringing exactly that to their new nation: complete equality. Even, and maybe especially, to slaves.

Introducing, the first in a brand new Miles Standish-designed series of the An American Life Collection:

Abraham Lincoln didn't care to dwell on his childhood, he summed that chapter of his life up to "the short and simple annals of the poor." But it's clear from his staunch belief in the power of self-education and his own success from it that Lincoln never let his beginning influence how his life would turn out. Growing from a curious child into an eloquent man allowed Abe to captivate audiences with his powerful words and firm beliefs.