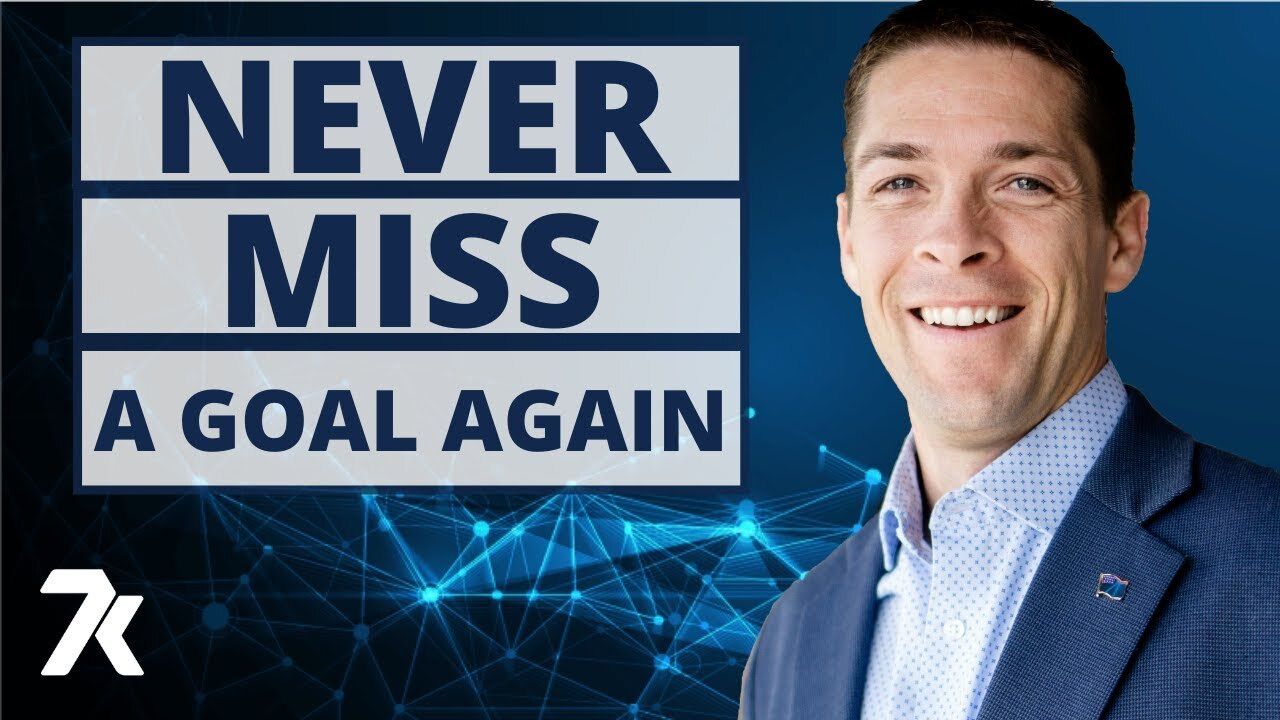 (Transcription of video above:)

But anyway I wanted to talk to you guys a little bit about goals. I was thinking about this this morning as I was working out, and you know a lot of people--okay I shouldn’t say a lot of people, but here’s a fact, only about 4% of the world’s population actually sit right down and actually go after their goals. So what happens to the other percentage of people? Well, they’re just floundering around, not really getting much out of life.

So I want to talk to you about goals a little bit, and how we set goals and how we achieve those goals. Look, if you’ve set goals before and you’ve never achieved them, it’s probably because it looks something like this: we’ve been trained as an American society--I don’t know how the rest of the world does this but as an American society -- we’ve been trained that every year around New Year’s, we set a New Year’s resolution, right? A goal. But here’s the problem, we never check in on ourselves til a year later to see how we did on that goal. So by the time you check in a year later it’s too late because that’s only one chance to make a change.

So this is an effective way you can set goals that I think makes all the difference in the world: so i guess it’s been about 15-16 years ago, I took up archery hunting and I absolutely love it. But the way I was trained when I started archery hunting, from a guy who was very successful as a competitive archer was that when he taught me how to shoot, the first thing he did was he only put the target about 5 yards away from me. And I thought, "5 yards? Anybody can shoot 5 yards!" And he just made me shoot arrow after arrow after arrow after arrow, and then he’d let me move back a little bit and we’d shoot again. When the pattern of the group got too big, he would make me move forward again.

So here’s what i want you to do: instead of making a goal now--if you wanna make a goal to make 10 million dollars or you wanna make a goal to make a million dollars, that’s fine, I totally get it. I think you oughta have that goal cuz it’ll change you in the process of getting there, but here’s one thing you gotta be careful of. You can’t keep your eye on that goal and that goal alone, and think that’s where you’re gonna go, because that’s like setting a goal for a year from now and then only checking in one time. As you shoot and as you work toward that goal you don’t even know if you’re getting close to it, okay? You have no way to measure, okay?

Are you gonna hit that 10 million dollar mark by the end of the year? Are you gonna hit that hundred thousand mark by the end of the year, or whatever goal that you've put together? So what i want you to do i want you to start setting those short term goals. Because here’s what happens, just like in the archery example, when you set these short term goals and when you hit the target every single time and you never miss, guys, what’s that feeling? You feel like a hero, you feel like a champion, like there’s no way you could ever miss! And then you move that goal just a little bit further back.

So if you’re in 7k Metals and you’re watching this video, here’s what I want you to do. A lot of you have a goal to become a Gold. I think that’s awesome, make $7,000 a week--guys, I want you to fight for that goal and I want that goal to be yours, but here’s what I want you to do. If you’re an Associate, I want you to set that goal to hit Copper, and when are you going to hit that? Because that’s moving the target much farther forward; it’s much smaller steps to get there, and now what happens is you start making those incremental changes that will get you to start doing the things that will make you attain that goal. And then what happens is your brain, all of a sudden, starts looking for ways to make that happen, and it starts feeling success, and you keep hitting the target.

Keep that long term vision out there so you know where you’re going and what you’re fighting for, but bring the goals closer. Because as you hit those goals it will give you momentum to be able to hit the long term goals, and you’ll also have a track to run on. This way you’re not just checking in once a year, either you’re checking in every single day. Now you can make those minor tweaks.

Look, if it didn’t work, what you did yesterday, no problem. You can change it, because what you’re trying to do is get one person, just one! If it didn’t work yesterday, try something new today, but if you’re trying to get 8...look, you don’t even know where you’re at, okay? It gets confusing, it gets deflating, people get discouraged, and then they end up wanting to quit because they can’t hit it, and they end up right back in the rat race that they’re trying to get out of.

So try that process of setting goals where you look at the long term. Figure out what you want in the future, but then come back, move the target closer, tidy up that group. Hit the target every single time so you start getting those short term wins, which will push you to your long term goals.

Alright guys, talk to you soon see ya."