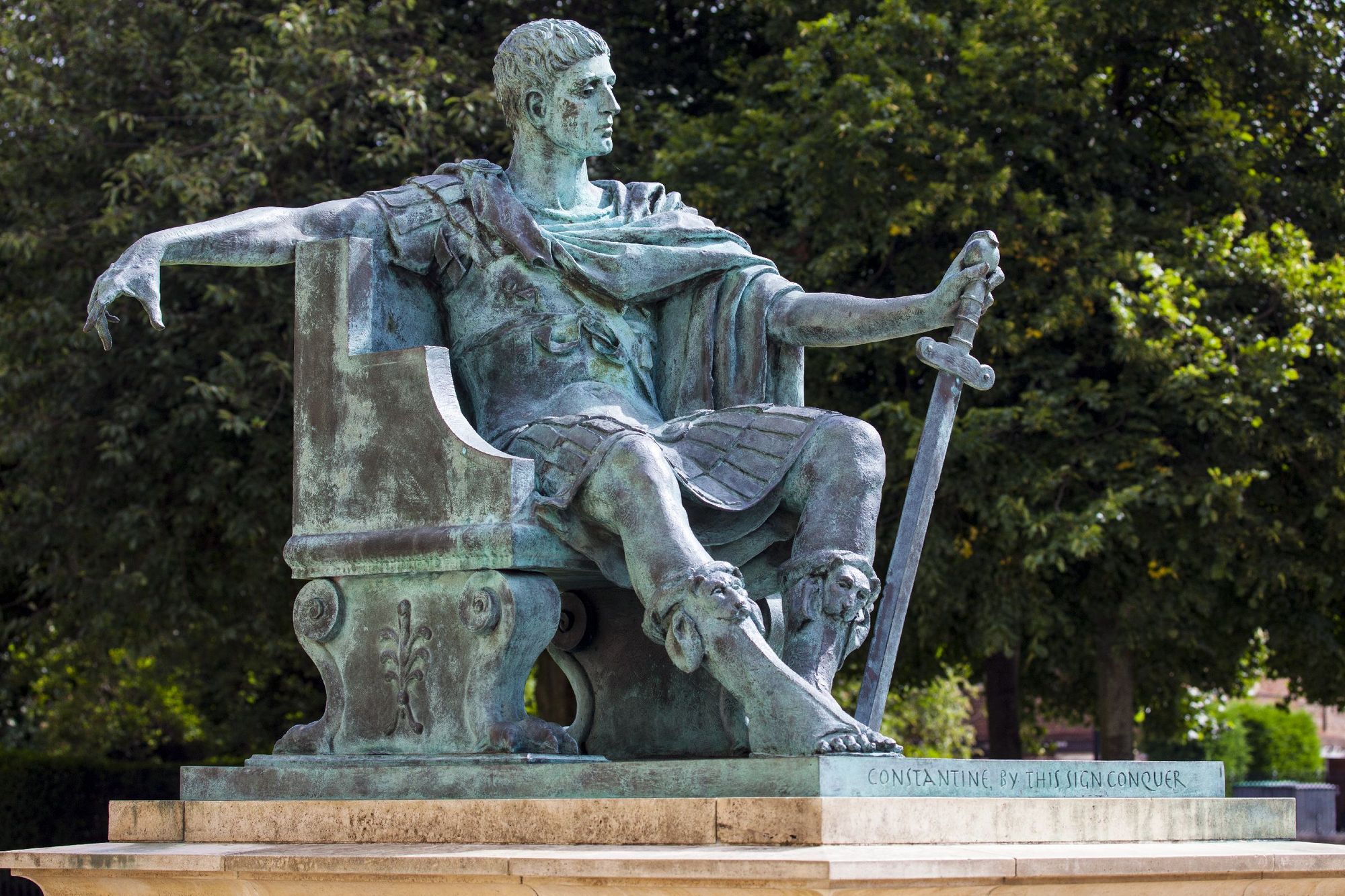 So Ancient Rome...what the heck happened? From what we always heard, the Roman Empire was strong, proud, and kinda vicious...until they weren’t. While they are still known as one of history’s greatest empires, the fall of Ancient Rome shook the planet. One leader, however, gave saving it his best shot:  Constantine the Great, the brilliant military leader and Augustus.

Now, you might be thinking, “If he was one of the last rulers of the Ancient Roman Empire, how could he have done a good job? If this guy was sitting in the driver’s seat when the car rolled, wasn’t he a bad driver?” To that we say, you don’t get the words “the Great” printed behind your name in every history book ever without earning the title.

Constantine was born to his father, Constantius. Repetitive, we know. We assume lots of these guys liked the thought of their names going down in history so they named their sons NEARLY the same name with just a hint of originality, just in case they turned out to be complete failures. So let’s make it easy and call this guy Papa C.

So Papa C. had Constantine but he was also a Caesar at the time. A Caesar was to an Augustus what the vice president is to the president. He didn’t really have time between all his duties to make sure little Constantine was taken care of, so he let him stay with his mom in the courts of their Augustus, Diocletian. This guy was a real piece of work, however one of his better ideas was to share power between the north, east, south, and west parts of Rome. He knew they were expanding at a crazy rate and there was too much land to rule for only one guy. So Big D graciously took one of the Augustus roles for himself, and appointed Maximian, his right-hand man, to be the second. Papa C and a guy named Galerius were elected to be their Caesars. This all worked fine and well for a while but all hell broke loose when Big D and Maximian decided it was time to retire.

Naturally, the next in line for Augustus would be the Caesars, Papa C and Maximian, which worked out just fine. However, when they moved up the ranks, their Caesars got appointed for them, a Maximinius and Flavius. Now Maximian (Max I for short) had a son, Maxentius (Max II), and Max II and Constantine felt a little gipped that they’d been passed over for their fathers’ positions as Caesars. They’d been bred and raised for these positions, it was their birthright!

Constantine especially had lived his whole life in Big D’s courts, he knew them inside and out. He’d seen his Augustus persecute the people intensely, from taxation to hunting certain religious patrons. He’d waited patiently for his time to change the game. So you can imagine how hacked off an ambitious young Constantine would feel when he saw the opportunity to change his world ripped away by a couple of posers.

Well, a series of civil wars, back stabbings and “Who’s-On-First” type fiascos later, and Constantine sat soundly as Augustus of the whole shebang. Not only that, but also he’d  reunited all of the four pieces of the Roman Empire back together again, stronger than ever! Instead of using his complete and utter power to his personal advantage, he instead constructed a new capitol, a new Rome, called Constantinople. We know, we know, a little on the nose and self-inspired, but give the guy a break, he did ONE thing for himself.

In this new capitol of the Roman Empire he did what he could to give freedoms back to his people. In fact, that capitol ? It survived for over a thousand years after his death. Constantine actually channeled some funds into finishing a Basilica in Constantinople, known today as the Archbasilica of St. John Lateran which stands in Rome as the oldest building in the city. Of course, bits and pieces have been renovated, destroyed, and rebuilt throughout time but that’s beside the point. He built a modern-day temple!

Beyond that, Constantine really did go after it when he said he wanted to “build a just and ordered society”. He designed a new form of currency and monetary system that helped to rebalance the Roman economy that had been inflated immensely by his predecessors. Those guys had minted bronze coins like no other.

Oh, and by the way, you have Constantine the Great to thank for your “day of rest” on the Sabbath. It’s said he converted to Christianity after having some visions and miracle-like experiences during his military career and rise to power. As a result, he was adamant that every person under his reign should be able to practice whatever religion they wanted! (Sound familiar?) At the time, many of his people were Pagan, but his rule influenced a rise of Christianity that lasted long after Constantine was gone.

What we’re really trying to get at is that not only was Constantine a wicked-awesome emperor and military leader who appealed to his people through mutual respect and love, but he set up a lot of fundamentals of living that survive into the Western World even today. Literally, nearly 2000 years later! Talk about leaving a legacy!

He reunited a broken empire, one that had been the most powerful force in the known world. As Constantine aged, he did try to expand his empire again but unfortunately time caught up to him and he died. Soon after, the empire split up again. Was that their downfall? Nobody can know for sure but what we can surmise is that Constantine was leading them in a pretty good direction for the duration of his life. A last hurrah for the Roman Empire.

Constantine wasn’t labeled “the Great” during his lifetime. That nickname came much later when historians were charged with telling his story. He didn’t know his actions would earn him a historically awesome rep. Kinda like you. Live your best life, do great things, and maybe you’ll be “the Great” someday, too.

The 7th Commemorative Coin in our Roman Empire Series

Constantine the Great, who was Roman emperor from 306-337 A.D., earned this illustrious title because of the many reforms he enacted to strengthen the empire. He introduced the solidus, a gold coin that became the standard for Byzantine and European currencies for over a thousand years. And he took back territories that had been abandoned by his predecessors. He was also known as the “First Christian Emperor” after his conversion to Christianity during his reign.