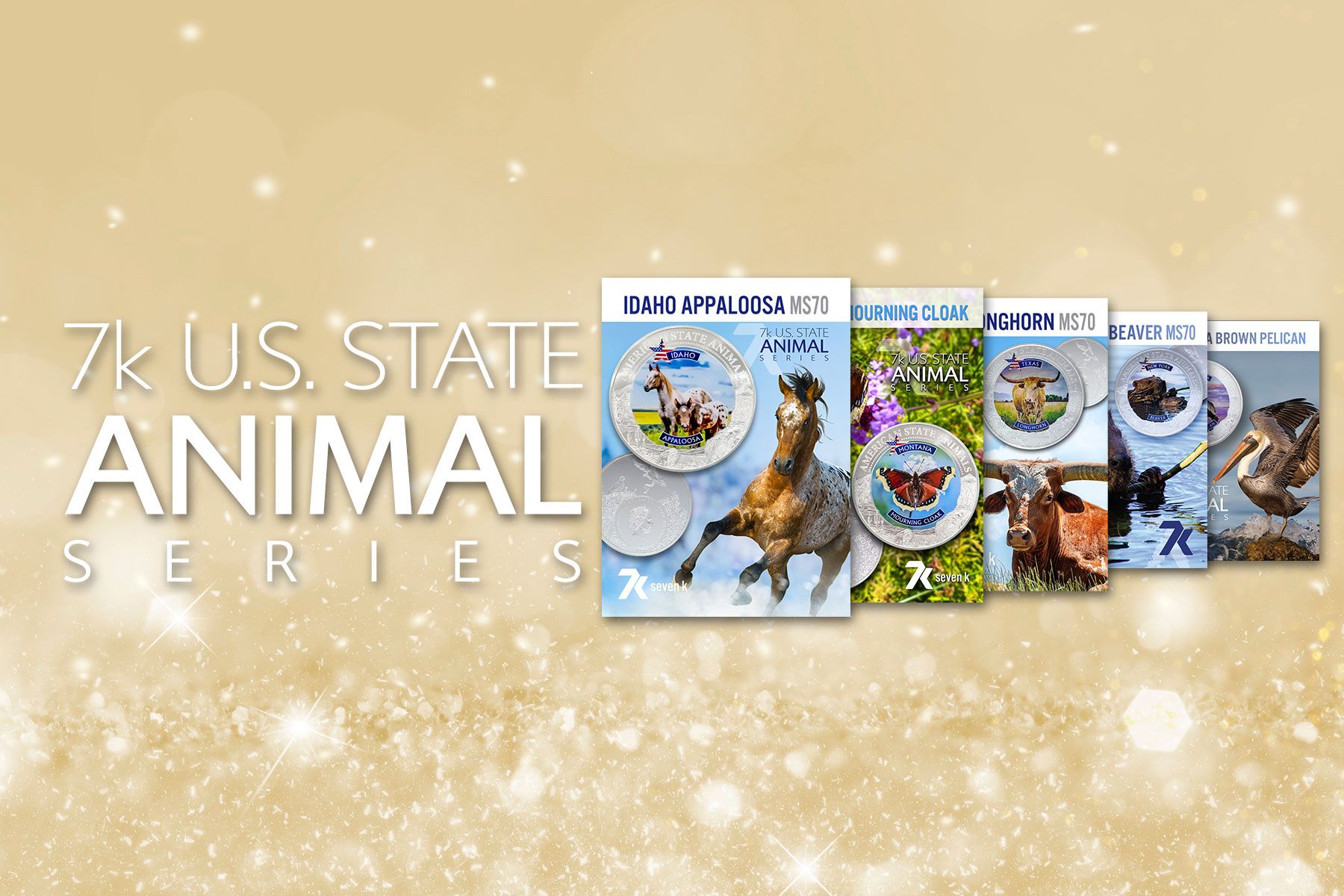 US State Animal Coin Series - a series of 1oz silver coins featuring a full color depiction of an official state animal from each US State, exclusively from 7k Metals.

A 7k exclusive collection, the U.S. State Animal Series is available to our members who choose the Variety Autosaver program. This collection features an official state animal on a 1oz silver coin for each U.S. state. (Not to be confused with the 7k U.S. State Label series, which is part of our Basic Autosaver program.) Each coin features the 7k logo hidden in the obverse design. See if you can find it! This is sure to be a very valuable collection.

Listed below in alphabetical order.

Alabama, unofficially known as The Heart of Dixie, is represented on our exclusive 7k State Animal Coin Series by the Yellowhammer. This industrious little woodpecker has earned himself many nicknames, including harry-wicket, heigh-ho, wake-up, and gawker bird, which tells a bit how Alabamans feel about his noisy habits. But he works hard and gets the job done. Just like us, right 7k fam?

Can you imagine your head making up one-third of your body length? Especially when you’re 65 feet long! That is reality for the Bowhead Whale, the star of the 7k State Animal Coin for Alaska. Featuring a whale and her calf, this 1oz silver coin will last longer than an actual bowhead whale, which can live up over 200 years!

Did you know that more species of rattlesnake live in Arizona than any other state? 13 of the 36 known species, to be exact. The Ridge-Nosed Rattlesnake is characterized by strong white facial stripes and ridges along each side of its nose. But don't worry, its venom isn't particularly potent and no human deaths are on record from its bite. One less thing to worry about.

What weighs 600lbs, can run 35mph, and has 4-inch-long claws? The state animal of California! In fact, the mighty grizzly bear is so iconic in California that it features prominently on the official state flag. You’ll often see Californian’s repping their fave bear on t-shirts, bags, and other gear. Now he’s on a highly collectible coin, too. Mintage of 5000 coins.

Named for their massive, curling horns, Rocky Mountain Bighorn Sheep are found only in very rugged terrain high up in the Rockies. These tough guys don't shed their horns like antlers on deer or eld, they carry that giant rack (weighing up to 30lbs!) around their entire life. Dominance is established between rams by body and horn size, with they use to head-butt one another when disputes arise.

When we think of animals in Florida, the first that come to mind are alligators, dolphins, and manatees. But the actual official state animal of “The Sunshine State” is actually the panther. As if there’s not enough to worry about with ‘gators running around, Florida. Now you tell us there are six foot long “catamounts” prowling your woods, too! Maybe we’ll just admire the coin from here. She is a beaut!

Technically a reptile, the Gopher Tortoise is Georgia’s 7k exclusive State Animal because… get this… it is the oldest living species native to Georgia. The gopher tortoise belongs to a group of land tortoises that originated in North America 60 million years ago! Georgia’s first residents are named for the burrows they dig--up to 40 feet wide and 10 feet deep. What a cool coin!

The Hawaiian monk seal is named for its solitary nature and the folds on its neck that resemble a monk’s cowl. These earless seals are only found along the coasts of “the Aloha State”. Until now! You can take one of these endangered cuties home on the 7k State Animal Coin for Hawaii. In fact, there are fewer monk seals left on earth than the number of these coins in existence!

The home state of 7k headquarters, we started the series off with our own Appaloosa horse. What's spotty, highly variable, and moves at a breath-taking pace? 2020 real estate prices in Idaho! Just kidding (kind of)... the Appaloosa horse, of course. A rare mintage, collector's series, and gorgeous design, this coin is a winner for sure. Mintage of only 2000 and features the 7k logo hidden in the design on the obverse of the coin.

"Toto, I've a feeling we're not in Kansas anymore. We must be over the rainbow!” You don't need to follow the yellow brick road any further to find another coin to add to your collection. :) For a millennia, the Kansa Native American tribe inhabited what we now know as the state of Kansas. The state's landscape includes grassland hills, sand dunes, woodlands, fields of wheat, and much more!

The Kentucky Derby horse race is probably one of the first things that comes time mind when you hear Kentucky mentioned—right after fried chicken. Naturally, the official 7k State Animal Series coin for “the bluegrass state” features the thoroughbred horse, but did you know that all thoroughbreds can trace their lineage back to three horses known as “The Foundation Stallions”? This coin collection will create a “foundation” for your descendants.

Did you know that Louisiana is known as “The Pelican State”? Yep! In fact, Louisiana features its indigenous brown pelican on its state flag, official seal, and state painting. Brown pelicans are unique from other species in that they only live along ocean shores, they are the only dark pelican, and they’re known to plunge from the air into the water to catch their food. Talk about go-getters! Just like you! Mintage of 5000.

What has long legs and an enormous rack? The state animal of Maine, of course. The iconic moose is actually the world’s largest member of the deer family, standing over 6 feet tall at the shoulders and weighing over 1400lbs! Maine is the only eastern state where moose live. And now you can take one home on our exclusive 7k State Animal Coin Series Maine coin.

It's only fitting that the coin of "The Great Lakes State" features a fish. Found in many of the state's lakes, rivers, and streams, the Brook Trout is the official fish of Michigan, and can only live in cool, clean water. Way to go Michigan for keeping it clean for this little fishy! And way to go, you--for adding this beautiful coin to your collection.

Did you know that when a butterfly crosses your path it is a symbol of good luck? Well, you're in especially good luck with this exclusive silver coin. The Mourning Cloak Butterfly on its face is as breathtaking as the state she represents, and with a mintage of only 2000, the coin is even more rare.

Ladies, we can feel a special kinship with the Official State Bird of Nevada. The female mountain bluebird builds her nest all by herself; the male often acts as if he’s helping, but he either brings no nest material or he drops it on the way. Typical. Sometimes we feel like we’re doing it all ourselves, right? But keep going, keep working hard. Be like the state bird of the “the silver state"... the female one.

Meep-meep! Here comes the New Mexico Greater Roadrunner, speeding across the desert to make an appearance on his state's coin. Just like in cartoons, roadrunners love to run and can reach speeds of up to 20 miles per hour. These little predators are so common in "The Land of Enchantment" they are the official state bird. And a fun addition to your collection!

When we think of New York, we often picture the skyscrapers of the "urban jungle"; not the lush forests, rolling hills, and waterways that play an integral part in the state's history. But it was trading in beaver pelts, not Wall Street, that first drew settlers to the area. And what a fitting state animal the beaver is for New York! Industrious, always building, and never settling. Just like 7k members! Mintage of 5000.

Every state has a state animal, but only a few have an official state crustacean. Oregon has one because of a determined class of 4th graders who petitioned the legislature back in 2009. They prevailed due to the importance of the Dungeness crab’s importance to the state economy. It’s the most valuable single-species fishery in Oregon. And now it is on the state’s exclusive 7k State Animal Series coin. Way to go, crab!

The Ruffed Grouse: little bird with a big attitude. The official bird of "The Keystone State", the Ruffed Grouse is a hardy partridge-type bird that thrives in harsh winters. The male is known for beating his wings in a loud display that sounds a lot like a pull-start lawnmower getting going, although not as loud, of course. If he's looking for attention, he'll love that he's featured on this beautiful coin.

South Carolina designated the loggerhead sea turtle as the official state reptile after persistent petitioning by a fifth-grade class back in 1988. Speaking of persistence, loggerheads make an extended migration between their feeding grounds and rookeries. South Carolina boasts some of the most pristine nesting areas for these turtles on the east cost of the U.S. Now they are home on the 7k State Animal Series coin, too.

While Tennessee is home to such iconic cities as Nashville and Memphis, “The Volunteer State” is also home to a small ring-tailed mammal known for raiding garbage cans and burrowing in attics. The name “raccoon” comes from the Native American word “aroughcoune” which means “he who scratches with his hands”. Also known as “masked bandits”, racoons are as comfortable in urban areas as they are deep in the woods—and hopefully now on a coin!

Everything's bigger in Texas! Just look at the horns on the state animal, The Texas Longhorn. They're huge! Averaging over 100 inches tip to tip, those horns are iconic, a symbol of the great Lonestar state itself. Home to cattle ranchers and oil reserves, Texas is one of the biggest states in the U.S. and is an essential addition to our coin collection. Mintage of only 5000.

Did you know that elk used to roam across most of the United States but can now only be found west of the Rocky Mountains? By the 1800's the elk was completely wiped out in the easter part of the country, but hunting regulations have allowed the state animal of Utah to flourish in the west. Elk are plentiful in "The Beehive State" these days. And now they're preserved on this gorgeous coin as well!

Did you know that the orca whale was named Washington state’s official marine mammal because a group of local second graders petitioned the legislature for two years to designate it? That’s the power of consistent effort! Speaking of power, orcas are also called “killer whales” and “wolves of the sea” because they eat about 500lbs of food per day and weigh up to 12,000lbs themselves. Cool coin!

Watch this page as more State Animal Coins are revealed!

Have you seen the announcement?